The desire and idea to go to Iceland came about when I saw an awesome picture of the Northern Lights.  I decided that I had to see them.  After looking into which countries would be good options, I noticed that Iceland has an amazing New Years Eve celebration.  I decided I would try to take advantage of them both!  I will admit, I didn't know much about the country at the time, but I knew as soon as I went, that it would soon be on the map of extremely popular tourist destinations.  Iceland has only about 4-5 hours of sunlight in the winter, making the dark and cold nights optimal for Northern Lights chasing.  In the summer, Iceland has 24 hours of daylight.  I will definitely be going back to experience that season next! Go there now, it's already becoming more popular than I could have imagined!

THE BLUE LAGOON
If you've done any research on Iceland, I'm sure you know that they are famous for their hot spings.  The Blue Lagoon is a more commercialized spring but close to the city and if you are traveling in the winter, it's the most convenient to get to.  I absolutely loved the blue lagoon we ended up going twice.  The thing is, it's in-between downtown Reykjavik and the airport so we went first thing after landing in Iceland (I sat in the airport for about an hour because you land very early from NYC and it is not open yet but I think it’s worth just waiting at the airport and grabbing a little breakfast at like the one open little breakfast stand).  I also went on our way back to the airport on our last day.  After a night of New Years Eve partying, it's was a great way to detox!  You could also make a day out of it in the middle of your trip if you prefer that.  Either way, definitely go! 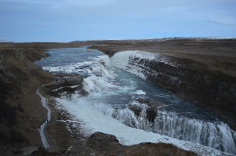 GOLDEN CIRCLE TOUR AKA GULLFOSS TOUR WITH NORDIC VISTOR
I picked the following package- The Gullfoss – Geysir & Langjökull Snowmobiling Tour. It was a little expensive but I wanted to make sure I got some snowmobiling in!  It was cold but really fun and beautiful!  This tour had geysirs, waterfalls, glaciers etc very pretty, and snow of course! 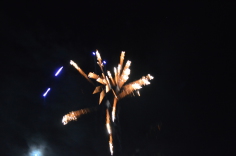 NORTHERN LIGHTS TOUR WITH SUPER JEEP
I know what you're thinking- that doesn't look like the Northern Lights.  Well, that's because it's not! Unfortunately, I was not lucky enough to see the majestic rarity. None the less, if you are in Iceland in the winter, you must go looking for the lights and I recommend Super Jeep.  This tour was a bit more expensive than some of the other options, but I didn't want to go in a bus with a large group of people and only be able to drive on the main roads.  This company has off-roading jeeps which allows you to go to more remote areas.  Also, if you don't see the lights on the first night, they will continue to take you out until you do.  Unfortunately, the final night of our trip was New Years Eve so we did not go out into the wilderness that night.  This is a picture of some fireworks they had for us to make up for a non-show on the lights.  Oh well, I will try again!

What an experience! One of the most fun time's I've had celebrating a New Years.  First off, the week leading up to NYE is the only week where you can legally buy Fireworks.  All proceeds go to the completely voluntary Iceland Rescue Squad and it covers their budget for the entire year, so you can imagine people are buying a lot of fireworks in preperation for when the clock strikes midnight! To start off the night, you can find a local bon fire where people set flame to what they want to rid themselves in the New Year, whatever it may be! Feel free to add to the pile!  Afterwards there may be a little downtime before heading to the town's main square where everyone gathers to set off their fireworks.  It's pretty crazy and potentially dangerous as there seems to be absolutely no regulation on what is going on.  Regardless, it's a total blast! All the bars start to get crowded after midnight, so bounce around to whatever looks fun to you! 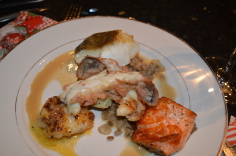 DINNER TOUR WITH CHEF TYFFI AND SEASON TOURS
This was a really awesome tour where Chef Tyffi, a local resident chef, picks you up andshows you around Reykjavik.  He will take you food shopping to buy some Icelandic delacasies and then he will bring you to his home with about 5/6 other people to cook a delicious Icelandic meal.  This company also does other tours but this was the only one we did with them.  Chef Tyffi was amazing and it was so cool to see inside a local's home and how they live!
RESTAURANTS
Siavargrillid (Seafood Grill): This restaurant could be pricey but is very very delicious.  I think what we did was called the surprise dinner for two which was four appetizers, two entrees and two desserts.  It was amazing chef and icelandicspecialties! I think if you chose something regular on the menu it might be a little bit cheaper which can be nice.
Fishfelagid (Fish Company): I ate at this restaurant for NYE so they had a special menu but all of the food was so good again!
Vegamot: I ate here for dinner one night and it was good!  A little more casual than the first two places and definitely turns into a late night spot to hang out!
The Laundromat Cafe: I ate here for breakfast one time, it was good! Not as good as the other two places but also not as fancy.
Icelandic Hotdogs: Iceland also makes their own twist on hotdogs that you must try! There is a stand/small but type business that sells them.  They are located on the main street that all the restaurants are on all the way down towards the water.

Room With A View

I stayed at the lodging apartments in room 601 for six nights over New Years Eve.  This apartment is beautiful.  The bed is very big and comfortable with nice sheets.  There are very large windows that coever two of the walls entirely, along with a huge balcony.  The apartment has a nice kitchen (no over if you are really looking to cook but luckily, we were not) with stainless steel appliances and a granite countertop.  There was also a huge kitchen table to seat six people.  The view is beautiful- you can see the ocean on one side and the town on the other.  My guess is that 601 is one of the nicest apartments here.  They also had a private  jacuzzi right on our balcony.  The hotel staff was for the large majority, very friend and helpful.  The cleaning staff on New Years Eve gave provided a free bottle of champagne! One thing to note is that a lot of people complain about the noise level as you are right on the main street.  Let me be clear, you are directly on the best street in Reykjavik so if you want a very quiet vacation, you may want to go somewhere else because you, you can hear the late night crowds.  But- if you want to be apart of the late night crowds then I can't think of a better place.  I absolutely loved our apartment but I will say it was a little bit expensive.  Other than that, it was perfect!